Polska Spółka Gazownictwa sp. z o.o. takes steps to bring fuel gas to areas which are not supplied with gas. Gasification of these “white spots” will be done as island gasification based on LNG regasification technologies if it is not possible to connect the newly gasified areas to the national gas network. 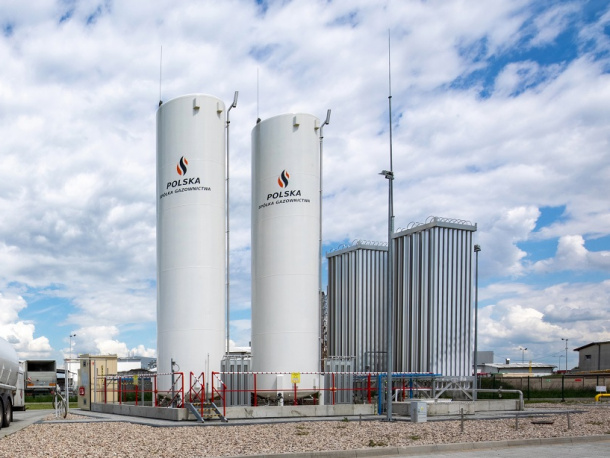 LNG deliveries by the Gas Suppliers (DSC) to the LNG regasification installations take place based on a Distribution Contract in accordance with the Terms & Conditions for the supply of liquefied natural gas to the LNG regasification installations. The Terms and Conditions have been developed in accordance with point 12.3.6 of the Distribution Network Code and constitutes a standard contract within the meaning in Article 384 of the Civil Code, used by OSD in electronic form. The Terms and Conditions are an integral part of a Distribution Contract. A link to the Terms & Conditions along with the Protocol of LNG Unloading/Delivery is below, in the Downloads section.

LNG (liquefied natural gas) is a high-methane natural gas converted into a liquid form to facilitate its transport to places beyond the reach of traditional gas networks. During liquefaction, natural gas is cooled to around -162 °C, resulting in a volume reduction of over 600 times. The most common LNG tank in the LNG regasification system, with a capacity of 60 m3, stores approx. 32,000 m3 of high-methane gas.

LNG regasification stations are being constructed and meet safety requirements. They are constructed in open areas in agreement with local authorities. After regasification, LNG turns into a gas which is lighter than air, which affects the safety of its use. After regasification, before it goes to the recipient’s gas installation, the gas is odorized to give it a characteristic smell, and the use of detection systems makes natural gas very convenient and safe to use.

The main task of the LNG regasification system is the phase transformation of natural gas supplied in a liquid state into a gaseous state.

It should be highlighted that the regasification process does not consume any energy, as the change from liquid to gas state takes place in atmospheric evaporators using heat from the environment. The regasification station is therefore a quiet facility, not burdensome for the environment, and energy-saving (the station only requires power for the control and supervision systems and area lighting to operate), which means that it can be successfully used in areas of natural beauty or health resorts.

In principle, gasification at such LNG regasification stations does not differ much from classic gasification. The difference lies in the method of delivering natural gas to the area where there is a demand for the fuel, and the fact that the area’s location in relation to the existing gas network prevents or limits a linear expansion.

Regasification stations can also be used to support the existing distribution network in the event of increased gas consumption.