On 14 October 2021 in Warsaw, on the initiative of Michał Kurtyka, the Minister of Climate and Environment, representatives of government administration, entrepreneurs, members of the scientific community, and business-related entities signed the Sectoral Agreement to Build Hydrogen Economy in Poland. Polska Spółka Gazownictwa is one of the signatories of the agreement. 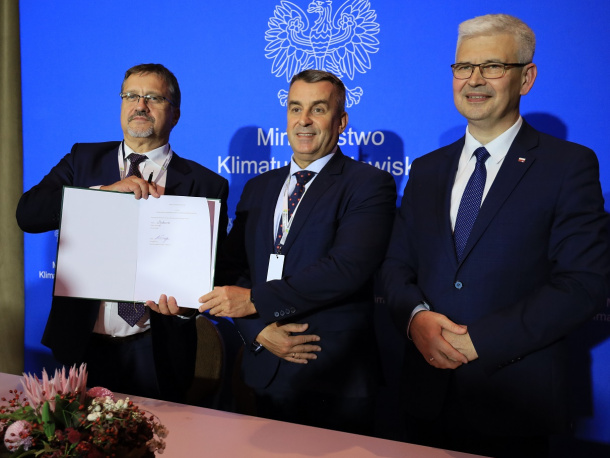 The agreement is the next step in the process that began on 7 July 2020 with the signing of the Letter of Intent to establish a partnership for building a hydrogen economy and entering into a sectoral hydrogen agreement. Michał Kurtyka, Minister of Climate and Environment, who attended the event pointed out that Poland was the first country in the European Union to enter into a sectoral agreement on the development of hydrogen economy, following the announcement of the hydrogen strategy for a climate-neutral Europe by the European Commission in July 2020.

“Today’s event gives me personal satisfaction because the Ministry I am in charge of is at the heart of initiatives that bring together many institutions and businesses united around a common goal, which is Poland’s economic growth driven by modern technologies. This is also further proof that Poland is at the forefront of Europe’s energy transition,” he said.

According to Minister Kurtyka, the development of hydrogen economy is a result of a deliberate government policy aimed at building an advantage for Polish business owners, creating thousands of well-paid jobs and, most importantly, improving the quality of life of citizens.

”Hydrogen Valleys to be established in different regions of Poland are one of the measures to achieve this goal. The aim of Hydrogen Valleys is to integrate entities from different sectors as a network of connections serving the development of the hydrogen economy value chain,” he stressed.

Polska Spółka Gazownictwa is one of the signatories of the agreement. On the part of PSG, the agreement was signed by Robert Więckowski, President of the Board, and Ireneusz Krupa, Board Member for Development and Investments.

“The agreement is a response to global challenges in counteracting the effects of climate change. It provides a number of solutions that fit perfectly in the transformation of the Polish energy sector. The accession of Polska Spółka Gazownictwa to the agreement is essential for us as it shows that we want to be ready for the future and what is ahead of us in the years to come. Many experts predict that hydrogen will be at the heart of energy transition,” said Robert Więckowski, President of the Board of PSG.